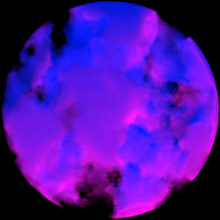 I downloaded the latest alpha release of Blender 3D the other day, mainly down to it’s use of volumetrics. I’ve been agnosing over the last few weeks about how to create a realistic 3D nebula effect much like the Mutara Nebula from Star Trek II:

The 3D Sphere at the top of this post was created by me in Blender where volumetrics were used to create that of a 3D cloud, an effect I’ve struggled to create in other 3D apps. It actually didn’t take me as long as I thought, do I’ll see if I can start making future images with it.

I mainly used this page as a guide to creating it; Blender’s UI is still taking some getting used to, but seems well worth the effort.

I’d animate the sphere, when I can manage to work out how… 😉