The model used in my previous picture is now available in the downloads section.

As always it would be good to hear how this mesh is used – so let me know of any pictures/animations!

This is a shot of a Deep Space Nine-style excelsior (hint: the nacelles glow) in orbit over Utopia Planitia.  The orbital dock seen here is a model I did of a station briefly glimpsed at in the Star Trek Voyager episode Relativity.  I didn’t have much reference material at the time, and it’s hard to believe but the model is now just over 10 years old!  Here is a closer shot of it (Click for a larger version):

I’ll put this up for download if there is enough interest in it.

The Excelsior class ship is however, not entirely my own – it was originally Eric Peterson’s mesh which you can get hold of here. I believe Matt Allen and Rob Willson also did some rework of it, and then I have taken it and done some re-modelling and retexturing of it (Phew!).  However my modifications were light and its still a great mesh to use.

Oh, and if I don’t speak to any of you before – Merry Christmas! 😉

Due to a request this weekend for a shot of the Insignia Class starship in a Nemesis-style drydock I had a quick search on the net and was lucky enough to find the above mesh at scifi-meshes.com by an S-Stephen.

I have only done a rough mock up so far (which is why the above is quite low-res, sorry), but I plan to do a couple of good desktop sized shots over the next week.  So stay tuned! 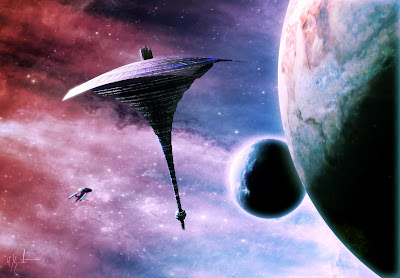 An attempt to make more use of Photoshop, the only 3D here is the station. I’m quite inspired by the work of artists such as Andree Wallin who seem to work almost exclusively in the 2D realm, although I’m a little far off his work yet 😉

A very simple model, but it’s design seems to be quite popular – So here’s some raw shots of the station to see what actual detail is there: 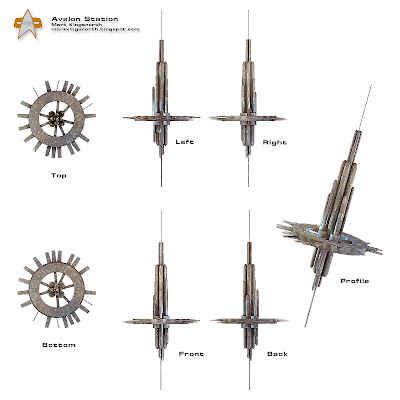 Here is a close up shot, well, as close as I’m willing to go on a model that was only meant to be some background dressing in a scene! 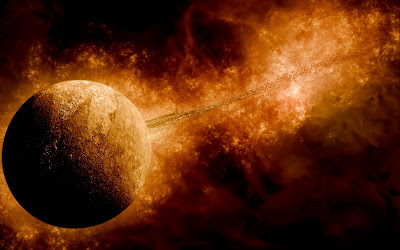 Before I ruin it by putting a spaceship in the foreground, thought I’d post this up.

The barren planet texture was from a picture that Chrissie took of the rust on the surface of an iron garden roller.

Update: I fianlly got round to ruining it by adding that space station here: 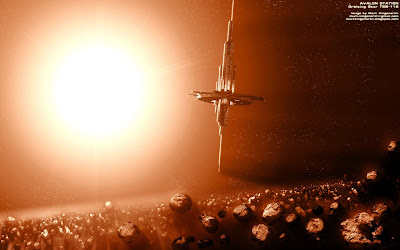 I’ve recently been bought a new Graphics Tablet by my very kind and understanding fiance, and boy what a difference it’s made to how I create pictures. Here is a shot of the station shown in the “First Step” picture, now renamed Avalon station for the sake of a Star Trek Sim I am doing some images for.

Done in a combination of Photoshop and 3DS Max.