For some time last year I was working on a project for Sonnett Realm Productions, where I was tasked with realising the concept and animation of some invading saucer-like motherships.  The concept was meant to very much reflect the genre of the piece.

Whilst the project is on ice, here are some test animations and images with some annotation:

First off, a simple shot of the saucer emerging from some clouds.  The pulsing center was inspired by the saucer seen in Cocoon, but there are of course a lot of Independence Day references to the design.  The main direction was that the mothership had to be black.  At first the blue glow started off being much brighter than it is here, and the initial pass showed all of the ship in frame.  However, to portray a sense of scale more, the camera was brought closer and only the central part of the ship is seen.
The brief part that shows the saucer coming out of the cloud was actually the hardest here, believe it or not.  I faded flat 2D layers of cloud in post production to get the effect, which cut down on the render time of an actual CG cloud.

The shots increased in complexity at this point – the brief was to show a set of saucers descending on a city.  The concept storyboard sent to me indicated a hazy-sunset type effect which I attempted to recreate in the scene here.  The city is a still stock photo of night time New York, with subtle noise effects added to the windows and streetlights to give the impression of a living, moving metropolis.  Noise effects were also added to the still photo of the lake to give the impression it was noise.  The motherships were then rendered in to the scene and then a solid colour was laid over the entire shot to blend all the elements in together.

This is my most favorite – and complicated – of the shots I put together. The camera pulls out from the edge of the saucer, showing the true origins of the invaders, and pulls far out to show multiple ships devastating the land.
The complication came not only from the pullback of the camera which involved some fine control, but also from the many elements overlayed on the shot: the still background photo of the landscape had to be wrapped correctly, and the expanding mushroom cloud shot had to be synced with the moving landscape. The mushroom cloud was again a still image with distortion effects added to it.
Then the laser effects were overlayed on top of this, with lots of glow added in post production. The small fighter you see getting obliterated here was added last, where the exploding debris had to also be synced with the laser beam it hits. You can see the low poly mesh of the fighter in one of the still shots at the bottom of this post.

Finally for now, there is shot 4 – which is a much simpler shot, although it took longer to render because of the reflections involved in the skyscrapers. The main brief was that the saucer descends/rolls into shot from the point of view of an onlooker. After doing this shot, I noticed that the V remake had a very similar shot in the daytime. Again the whole effect is very reminiscent of Independence Day to keep the genre recognizable.
Finally, this animation shows the very first test shot I put together:
Below are some stills of the mothership I did before doing the shots above: 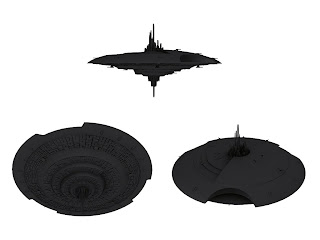 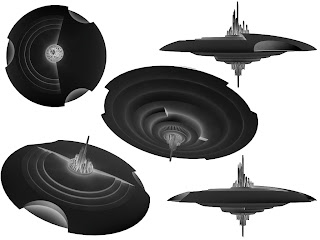 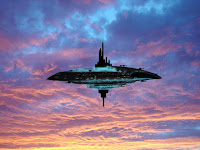 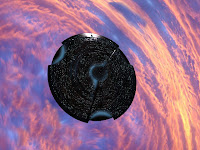 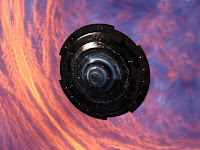 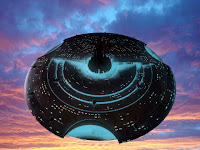 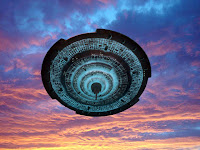 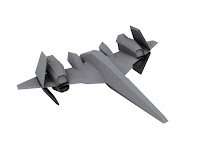